There are more links at the top and bottom of each page.
These concern the administration of the site, but you should visit them just the same.

Before starting, I want to express my gratitude to my friend Paul Humphries.

No mention of this site would be complete without a tribute to him. His engineering background has proved invaluable as a foil to my theoretical ideas and he has succeeded in translating some of my more fanciful ideas into working, practical projects. He's always had an open ear to whatever latest fancy is running around my head, proved an invaluable link in resourcing some of my more unusual requests (but still not the long-haired Asian princess, although we came pretty close to that on two occasions), and when his wife gets fed up with him she sends him over here where he's an extremely hard-working and resourceful companion. No-one could wish for any more from a friend.

Now, if you're concerned about the proliferation of nuclear reactors and the failure of 21st Century Man to dispose of radio - active waste, or our increasing reliance of Natural Gas from North Africa and the Caucasus, then maybe you have been wondering about how to replace it

Actually, you have quite a lot of choice. Why not

However, there are several alternatives which are not only environmentally - friendly, but can provide cheap - and even free - power, and prevent innocent people from catching all sorts of illnesses, many of which could well be fatal!

There's nothing new about this. The technology has been around for centuries but we abandoned it for cheap oil and gas. Now we need it again, most people have forgotten all about it, including how it all works.

So naturally, your first thought is - "Why am I lecturing to you?" - "What am I doing about it?"

In fact, I like to think that I am one of the small but growing band of people who has decided to take their destiny in their own hands. In a few years time, I'm hoping to be independent of mains electricity, mains gas and mains water. 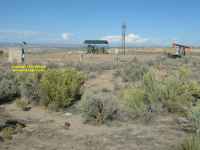 Utopia, you might think, but I don't think so. This oilrig on the left (that I photographed in New Mexico, USA in 2002) is powered by a solar panel, so even the oil barons reckon that I have a point.

I'm convinced that there's a future in this, so convinced in fact that I want to explain my ideas to you, invite your comments, make you think a little bit, and maybe see if I can't just plant a little grain of idea in your mind.

Of course, if I can sell you a product and make a bit of a living too out of it, then so much the better but that's not compulsory!

So, to visit my site (in both senses of the word!), to see what I'm trying to do, read on!

The purpose of this web page is to provide information about my project of restoring an abandoned farmhouse in the Auvergne about 25 km (16 miles) south of Montluçon, about 40 km south of the geographical centre of France. It's situated at an altitude of about 600 metres (2000 feet) 5km from the town of Pionsat. 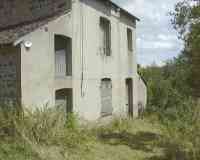 The house itself has I reckon been abandoned for about 20 years but the roof was complete and most of the windows were intact. There was no running water, and whatever electrical wiring which was in the house .... well ..... I took one look at it and now most of it has been ripped out (and the rest is to follow shortly). It has to be said, however, that all the "gros oeuvres" were in good condition and provide a good base to work on.

The site in fact consists of about 2.5 hectares (nearly 7 acres) of land, of which about half is afforested, with deer and wild boar roaming wild. The fields haven't been worked for about 20 years at least, and the forest hasn't had a foot set in it for maybe twice that long - good news for the animals. 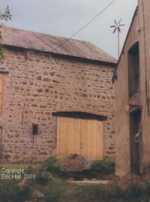 When the farm is completed it will be :

I'll eventually have a solar furnace to produce extra electricity, and maybe use the power of the rainwater falling down the drains to run a little hydro generator. 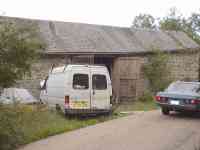 The large barn with the property is really impressive. It has a floor area of 280 square metres (300 square yards) and is on two levels.

It's strongly built but the tiles are a bit substandard and they'll have to be looked at in the very near future. 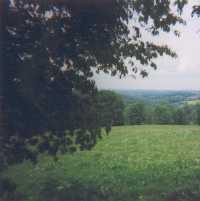 The southern aspect of the site is sheltered by trees, the west and north by the barn and a low hillock, beyond which are some impressive views across to Montluçon and Commentry, and the eastern side slopes down to a wooded stream.

The site receives about 90% of the available sunlight (early in the morning the sun has to rise over the hills on the other side of the river valley) and my calculations are that a wind turbine on a 15' pole above the roof of the barn will catch most of the prevailing westerly winds.

There were one or two urgent tasks to be accomplished however. This means that for the next few years I have to live in somewhat "strange" surroundings, like in a caravan in the barn. Actually it's amazing how comfortable you can be once you get used to the idea, and it certainly isn't a particular hardship. Many thanks to Enzo Ridolfi for giving me a fairly modern paraffin heater that he no longer used. You've no idea how much I appreciate your gift, Enzo - especially when it's minus 15 degrees Centigrade.

A great many people have helped me make this project what it is today. I've received a great deal of advice, and a large number of donations, from a handful of screws to a four-wheel drive Subaru. I am grateful to everyone.